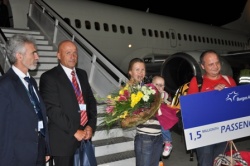 Olga Andreevna, who arrived at Burgas Airport on the Bulgarian Black Sea coast Saturday night 22.27 EET from Moscow, turned out to be the airport's 1,500,000th passenger for 2010.

This year Burgas airport welcomed its 1 millionth and 1.5 millionth passenger within one month.

Russian traveler Andreevna came to Burgas Saturday night with her husband and little daughter for a two-weeks’ holiday in Sunny Beach north of Burgas.

The lucky traveler and her family were serviced in the airport's VIP hall and greeted by the airport director Georgi Chipilski and Burgas region governor Konstantin Grebenarnov in a special ceremony.

Burgas Airport reports it registered the 10% growth in passenger flow expected for the season.

The largest growth has been in passengers from Russia and Israel.