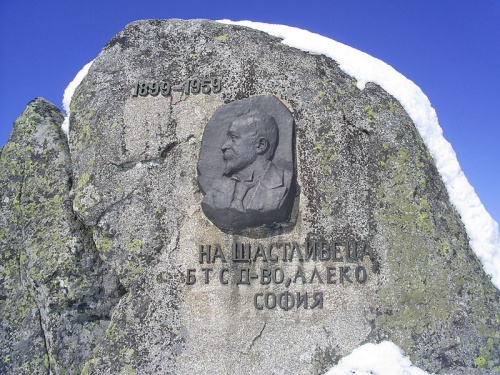 The monument to Aleko Konstantinov, who founded the first hiking and tourist society in Bulgaria, on the Cherni Vrah summit in the Vitosha mountain nearby capital Sofia. Photo by Svilen Enev.

Hikers will mark the 115th anniversary of organized hiking in Bulgaria this Sunday at the Cherni Vrah summit in the Vitosha mountain nearby capital Sofia.

A couple of days after the original event Aleko published an enthusiastic article under the title “Unbelievable but True: 300 People on Cherni Vrah.” Thursday the Bulgarian Tourist Union announced that some 4000 people are expected at the mountaintop Sunday.

Hiker's day will also be marked with the fourth annual Vitosha Run mountain running contest, setting out at 9 am at the National Palace of Culture in downtown Sofia to end at the Cherni Vrah summit (18 km track, 1734 m ascent).

All interested are invited to take part in the race, with professional runners, skiers and other athletes already having confirmed participation. The event is organized by the Marathon Society with the help of Sofia Municipality and the Bulgarian Athletics Federation. For more information about the mountain running race, see HERE.