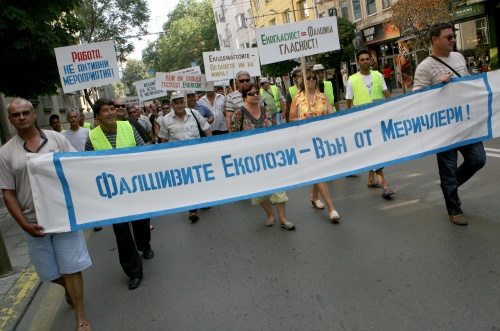 "The Fake Environmentalists - Out of Merichleri", reads the banner of the protesting miners. Photo by BGNES

Some 150 miners protested in downtown Sofia against what they see as a malicious campaign on part of an environmental organization against their employer.

The miners work for Kaolin Jsc, a company dealing with the extraction of construction materials such as china clay (kaolinite), which has been accused by a environmental political movement called Ecoglasnost of destroying the environment when extracting limestone from a deposit near the southern Bulgarian town of Merichleri.

Kaolin Jsc is owned by Alpha Finance Holding whose major shareholder is businessman Ivo Prokopiev, the majority shareholder in Economedia, the publisher of the Dnevnik Daily and the Capital Weekly.

The Ecoglasnost political club split off from the National Movement Ecoglasnost backing the rightist Union of Democratic Forces in the late 1990s, and declared itself a leftist organization. The former leader of the leftist Ecoglasnost, Stefan Gaytandzhiev, subsequently served as an MP from the Socialist-dominated Coalition for Bulgaria.

As early as the spring of 2010, Ecoglasnost accused Kaolin Jsc of tax evasion of BGN 20 M, and of establishing an artificial monopoly in the sector. Over the past few weeks, it started to accuse the company of failing to observe environmental regulation in the Vulkan Quarry near Merichleri, Haskovo District.

The miners who protested in downtown Sofia Tuesday claimed that the allegations of the people they described as fake environmentalists were aimed at discrediting their company in order to achieve specific business and political goals.

The leader of the protest Pencho Tokmachiev, chair of the Federation of Independent Miners’ Syndicates, vowed that all miners in Bulgaria supported the protest of the Kaolin Jsc employees.

“If the extraction of limestone is terminated, this means that the thermal power plants in the entire Maritza East complex must stop working. This is going to affect thousands of other miners working to extract coal for these plants,” forecast Tokmakchiev.

The protesters handed a declaration backed by 700 signatures in support of their employer to Valentin Grozev, head of the Minerals and Energy Resources Directorate at the Bulgarian Ministry of Economy, Energy, and Tourism, who explained that the government will seek a dialogue in the dispute.

The syndicate leading the protest rally believes that the industrial activities of Kaolin Jsc are not detrimental to the local environment and to the quality of life in the town of Merichleri. They have predicted that the potential closure of the Vulkan Quarry will lead to the loss of 12 000 jobs in the region.

Meanwhile, the management of Kaolin Jsc announced that they had alerted the Prosecutor’s Office over the “campaign” that the Ecoglasnost organization has staged against the company.

“We are being subject to systematic harassment and well-organized racketeering and blackmailing by fake civic and environmental organizations that are backed by competitive business interests,” states the position of Kaolin, which has been submitted to Prime Minister Boyko Borisov and several of the ministries.

The company points out that the chair of Ecoglasnost Emil Georgiev, who also heads an initiative committee named “Let’s Rescue Merichleri” is proven to have been a former agent of the State Security service of the former communist regime exposed in 2007 as Agent “Stanislav”.

A video of the protest watch HERE