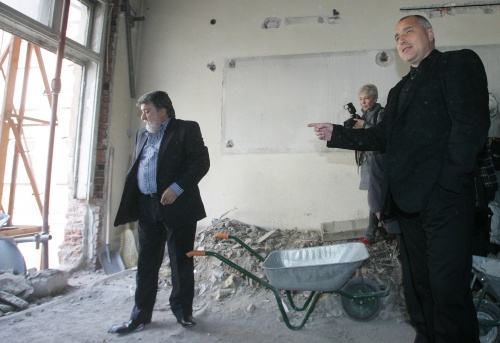 PM Borisov (right) and Culture Minister Rashidov (left) seen at the abandoned building of the Sofia Technical University during the groundbreaking ceremony for what is to become the “Bulgarian Louvre” museum. Photo by BGNES

The public tender for the new museum complex in the capital Sofia, known as the Bulgarian Louvre had attracted 31 architects, the Culture Ministry informs.

20 of them have submitted their projects just hours before the deadline. It is still unclear when the commission, assessing the proposed designs, will convene, but ever since the public tender was announced in the beginning of June, architects have been upset that the time is not enough while the Chamber of Architects complained the tender has not been coordinated with them.

The decision to build the new cultural complex, which is located in the very heart of the capital Sofia, adjacent to the “Alexander Nevski” Cathedral, was made at the end of 2009, while in mid-April, Bulgarian state leaders broke ground of the construction site.

In December, Culture Minister, Vezhdi Rashidov, said the 24 000 square-meter museum will be designed as project of architect, Vladislav Nikolov, approved by the former socialist-led cabinet for BGN 1.8 M financing under the EU Operational Program, but later the Culture Ministry explained the Public Tender Act requires a competition and that Nikolov can participate if he wishes.