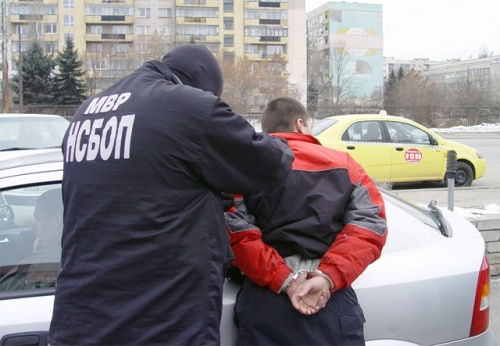 A video of a Bulgarian police officer threatening a detained drug dealer to confess his guilt has been displayed at the official website of the Bulgarian Interior Ministry.

“Confess immediately because it will hurt a lot,” the police officer warned one of the arrested drug dealers in two operations by the Bulgarian Unit for Combating Organized Crime (GDBOP) on Wednesday.

The police have arrested 24 people, including dealers, buyers, and organizers of two separate drug distribution groups.

During one of the police operations, the police have searched the apartments of the arrested, used for drug storages, and have found high-quality amphetamines, marijuana, cocaine and ecstasy.

Around 60 phones and sim cards, used for ordering drugs, have also been sezied, as well as BGN 15 000, gained from sales.

In the second operation, during a check of a Volkswagen, the police has found a nylon bag with 600g white powder. Under the wheel there have been another 2g of the same substance, which the police test has proved to be amphetamine.

Another similar police video has caused a public outcry in Bulgaria.

In the beginning of April, after the arrest of the former Defense Minister Nikolay Tsonev, the police have showed a video displaying the Deputy Sofia City Prosecutor Roman Vasilev calling Tsonev a “criminal” and ordering him to kneel down even though he was already handcuffed.

Vasilev apologized profoundly, arguing that he succumbed to emotions, but was punished by the Bulgarian Supreme Judicial Council (VSS) for his behavior during the arrest.