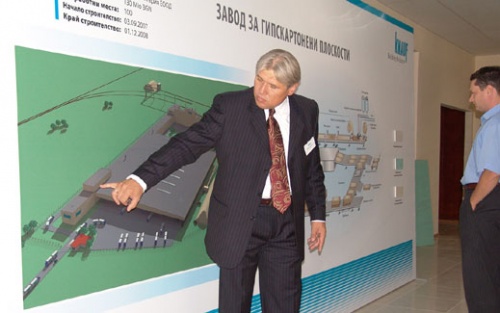 The plant will use each year 300,000 tons of the by-product from the flue gas desulphurisation operations of nearby power complex Maritza Iztok. Photo by Economic Portal Stara Zagora

Knauf, the German supplier of construction materials, announced it has put into operation what is claimed to be the most up-to-date plasterboard plant in Bulgaria, located near the power complex Maritza Iztok.

The company launched the construction of the plant in 2007 after qualifying for certification as First Class Investor by InvestBulgaria Agency, the local investment promotion authority.

The plant will use each year 300,000 tons of the by-product from the flue gas desulphurisation operations of nearby power complex Maritza Iztok.

She pointed out that plasterboard consumption has dwindled by 50% over the last year and currently stands at 1,5 square meters per head.

“Bulgaria has an excellent investment climate and we recommend that German companies invest here because of the 10% flat tax rate, the good location of the country and its logistics,” said German Ambassador to Bulgaria Matthias Hoepfner, who attended the opening ceremony.

In his words Bulgaria is more and more often considered as a trustful partner thanks to the reforms that the government implements in the justice system.

Knauf Bulgaria is a subsidiary of Knauf Austria, which stepped in Bulgaria in 1997 after the acquisition of the Gipsofazer plant in Vidin, North-western Bulgaria.