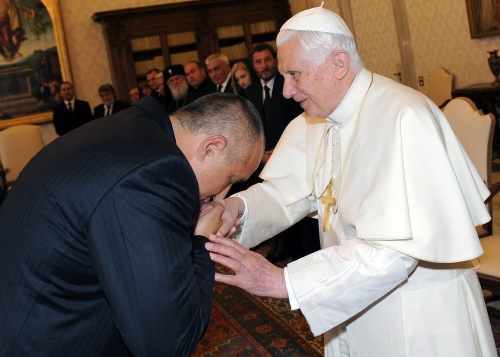 The Vatican TV has mixed up the delegations of Bulgaria and Macedonia received by the Pope for May 24, the Day of St. Cyril and St. Methodius. Photo by BGNES

A report of the Vatican TV channel has confused Bulgarian Prime Minister Boyko Borisov for the government head of the Republic of Macedonia.

In a report about Borisov’s audience with Pope Benedict XVI dedicated to May 24, the Day of Slavic Script and Bulgarian Culture, the Vatican TV speaks about a Macedonian delegation, reported Darik Radio. The report was published on the German version of the Vatican TV website, and was subsequently changed.

“On Saturday, Pope Benedict XVI received a high-ranking delegation from Macedonia on the occasion of the holiday of the Slavic apostles and patrons of Europe, St. Cyril and St. Methodius,” says the Vatican TV report, which does point out that the holy brothers helped convert Slavs to Christianity, translated the Bible into Old Bulgarian, and overcame suffering and hostility thanks to the power of their faith.

According to the Vatican spokesperson, the gaffe was just a minor "technical mistake".

"I don't know where this mistake came from. Perhaps they decided that our state expanded," Bulgarian Prime Minister Boyko Borisov said jokingly but added in a serious tone that such a mistake should not be used to mar the holiday.