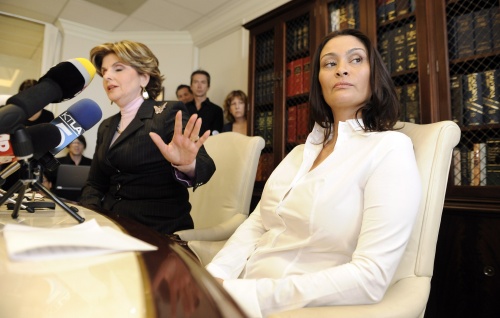 British actress Charlotte Lewis (R) and her attorney Gloria Allred speak to the media during a press conference in Los Angeles, California. Photo by BGNES

"I am also a victim of Roman Polanski. He sexually abused me in the worst possible way when I was just 16 years old. Mr. Polanski knew I was only 16 years old when he met me and forced himself upon me in his apartment in Paris. He took advantage of me and I have lived with the effects of his behavior ever since it occurred," Lewis said Friday in a prepared statement at a Beverly Hills press conference with her lawyer.

Polanski, 76, is currently under house arrest in Switzerland where he is fighting extradition to the US in his 1977 rape case. He was held in Zurich after traveling from France in September. In November, a Swiss court ruled to release him on house arrest.

Polanski, who holds dual French and Polish citizenship, was freed on USD 4,5 M bail. The court ruled he could stay at his chalet in the Swiss Alps and would be monitored by an electronic tag.

The filmmaker is alleged to have given 13-year-old Samantha Geimer champagne and drugs during a 1977 photo shoot at the Hollywood Hills home of actor friend Jack Nicholson before having sex with her despite her protests.

The director was initially charged with six felony counts, including rape and sodomy. The charge was later reduced to unlawful sexual intercourse after a plea deal agreed in part to spare his victim the ordeal of a trial.

Polanski later served 42 days at a secure unit undergoing psychiatric evaluation but fled the United States on the eve of his sentencing in 1978 amid fears that the trial judge planned to go back on a previously agreed plea deal.