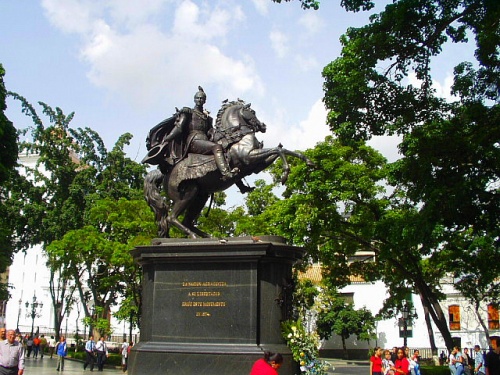 Monument of Simon Bolivar in Caracas, Venezuela. Photo by wikipedia.org

A monument of Latin American Liberator, Simon Bolivar, has been inaugurated in the Bulgarian capital Sofia on the occasion of 200 years of Venezuela’s independence from Spain.

The monument was opened by His Excellency Rafael Angel Barreto Castillo, Ambassador of the Bolivarian Republic of Venezuela to Bulgaria.

The monument is located on the Vazrazhdane Square in downtown Sofia.

In 2010, five countries in Latin America celebrate 200 years of independence from colonial Spain. The landmark celebrations begin Monday in Venezuela.

In 1810, Venezuela, Colombia, Argentina, Mexico and Chile started down the road that would end three centuries of Spanish rule. Ecuador in 1809 and Uruguay and Paraguay in 1811 were also part of this trend. The immediate catalyst came from Europe and the Napoleonic wars.

Simon Bolivar is the best-known of Latin America's freedom fighters. His efforts are widely credited with having brought about the end of Spain's colonial domination in northern South America in the early 19th century.

Bolivar was born into a rich family on July 24, 1783 in Caracas, in modern-day Venezuela. He had an elite education and after his parents' death in 1799 he travelled to Spain, where he pursued his studies further. He also visited France and Germany, before returning to Venezuela in 1807.

By leading many of these territories in the independence war of 1810-1825, he rose to the rank of "Libertador.”

However, he could not follow up his military success in the political arena. In 1830, faced with growing resistance, he resigned as leader of his hoped-for federation which was called Great Colombia (comprising much of modern-day Colombia, Venezuela, Panama and Ecuador) and he died of tuberculosis on December 17 that year in Santa Marta, in current Colombia.

He had failed in efforts to build a confederation of Latin American states which mirrored the federal plan of the United States. His relatively progressive social views, including the call to abolish slavery, also met with resistance from the wealthy.