Sofia to Rival Florence with Construction of Bulgarian 'Louvre' 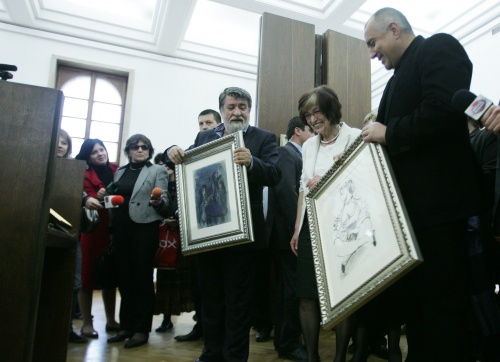 The government is investing BGN 20 M in the new cultural complex which is located in the very downtown of the capital Sofia joining together the building of the National Gallery for Foreign and an old building formerly used by the Sofia Technical University.

The decision for the construction of the Bulgarian Louvre was made in December 2009. Some BGN 2.5 M of the funds for the reconstruction and construction from the EU Regional Development Operational Program.

“Let me explain to you how the economy works because you are clearly listening to one and the same “experts” who talk every day. We are investing in industry. These investments are going to provide returns in the future,” Bulgarian PM Borisov stated when asked if it was not better to freeze the construction of the museum complex because of the economic crisis.

“Culture Minister Rashidov did explain to you that 40 million people visit Florence and each of them spends EUR 100 on museum tickets there,” the Prime Minister elaborated as he and Rashidov broke the ground of the new project.

Borisov said he hoped that the Lourve will be ready by mid 2012 together with the second line of the Sofia Metro and the Sofia waste processing plant.

“We’ve got BGN 2,5 M from the EU, then there are about BGN 15 M from the state budget. This kind of money will be spent by the middle of next year. After that, we will supply however much is needed,” promised the head of the government.

As a gesture to the future top Bulgarian museum, the Bulgarian government presented it with three original paintings of Pablo Picasso, Marc Chagall, and Salvador Dali.

“We managed to get the Picasso painting very cheaply, from close friends, it is almost a donation, we hardly paid anything,” Culture Minister Rashidov explained.

Later he revealed that the government paid BGN 5 000 for the work but did not say whether it was bought from a Bulgarian or from a foreign collector.

“Let’s roll up our sleeves, and start building this nice museum. Everybody’s talking about the crisis but this construction will cost the equivalent of a Christmas bonus for state employees. But once we are done, we will have a museum standing forever,” the Minister said.

“You know that there were many attempts to turn this building into something else. They wanted to build a Turkish hotel, or a state agency office. But I am extremely happy that together with the government, as a Minister, I have helped start building a proper Bulgarian museum,” Rashidov declared. He said he hoped the new Bulgarian Louvre would spur cultural tourism.

“You know, dear friends, when you go to Florence – there are 40 million tourists there visiting five establishments, leaving behind EUR 100 each. You can calculate how much the city of Florence makes from the tourists. This is going to be a completed museum. We will not longer speak about foreign art because we are in Europe. This will be a museum of European art,” clarified the Culture Minister.