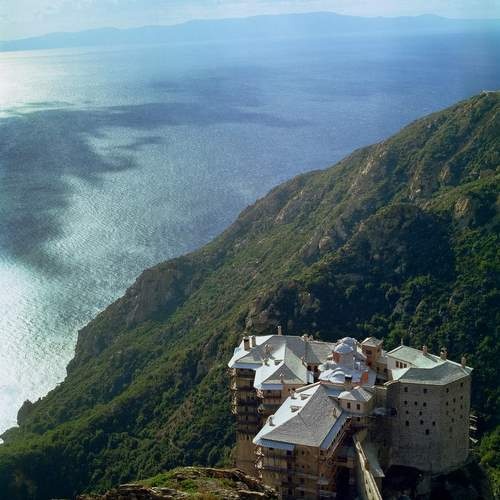 One of the 20 Eastern Orthodox monasteries in the Holy Mountain on Mount Athos, Northern Greece. Photo by BGNES

The Mount Athos Tourist Organization in cooperation with the Greek National Tourism Organization (GNTO) Bulgaria have held a special promotional event at the Hilton Hotel in Sofia in order to advertise Mount Athos as a tourist destination.

The event also featured a exhibit of special photos and rare editions of the Mount Athos Monasteries in Bulgarian, and the guests of the event have been invited for an official visit to the area.

The organizers have pointed out that even though Greece a very popular tourist destination for Bulgarians, Bulgarian visitors mostly go to a couple of locations in Northern Greece such as Thessaloniki and Kavala, and generally overlook the Mount Athos area.

Mount Athos located on the Athos Peninsula is the place of the so called Holy Mountain including 20 monasteries of Eastern Orthodox nations (mostly Greek but also Bulgarian, Russian, Serbian, and Georgian) dating back to the early Middle Ages.

Even though only men are allowed as visitors to the site of the monasteries, the Greek tourism tourism organizations have advertised the area adjacent to the Holy Mountain as a place suitable for women as well.