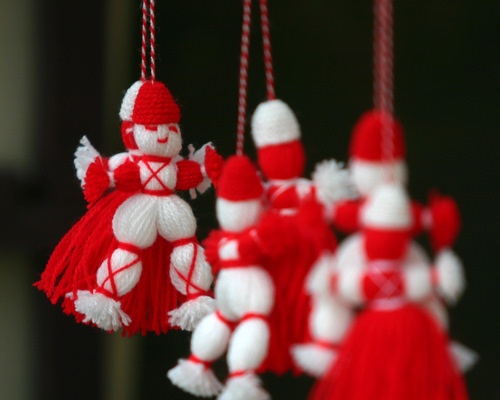 On March 1, the day of Baba Marta, Bulgarians are eager to buy and present one another red and white martinsas of various shapes and sizes. Photo by Sofia Photo Agency

All Bulgarians celebrate on March 1 a centuries-old tradition and exchange martenitsas on what is called the day of Baba Marta, which this year dawned with a shy sun, spelling relatively nice weather ahead.

Eagerly followed on March 1 every single year, the tradition of giving your friends red-and-white interwoven strings brings health and happiness during the year and is a reminder that spring is near.

Celebrated on March 1, Baba Marta (Grandma March) is believed to be a feisty lady who always seems to be grudging at her two brothers, while the sun only comes out when she smiles.

The martenitsa tradition is thought to have been inspired by Bulgaria's first Khan Asparuh, who sent a white string to his wife to tell her he survived a battle.

When the martenitsa is taken off some tie it to a tree - one that they'd like to be especially fruitful. Others place it under a rock and based on what they find there the next morning guess what kind of a year this one would be.

The martenitsa now comes in all shapes and sizes - from Guiness-worth giant building packages to two tiny simple strings gently placed on a newborn's arm. Children usually compete who will get the most and often walk around more ornate than a Christmas tree.