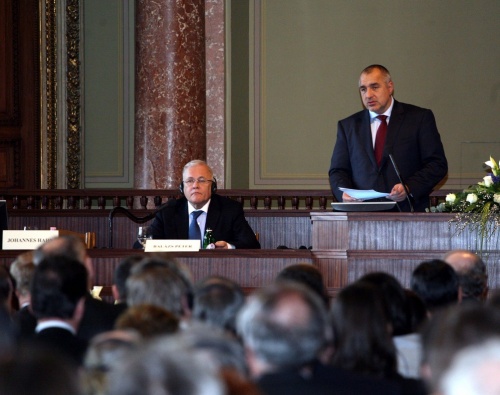 Bulgaria's PM Borisov took part in a Danube region conference in Budapest hours before the EU Summit on the Danube strategy. Photo by Council of Ministers

Prime Minister Boyko Borisov has made it clear that Bulgaria has high expectations from the future EU Strategy for the Danube Region.

“Bulgaria’s long-term interests in the Danube Region include boosting the transport and energy infrastructure, protecting the environment and cultural heritage, and investing in research and development,” Borisov said at a conference in Budapest, Hungary, dedicated to the development of the countries in the Danube Basin, several hours before the EU Summit on its Danube Strategy.

The Bulgarian PM underscored the fact that the huge diversity of the Danube region posed a challenge to the forming of a common strategy for development. He has pointed to the “unclogging” of the region’s potential for economic growth as its No. 1 priority in his view.

According to Borisov, in its talks with other EU actors on the Danube Strategy, Bulgaria will be guided by a vision of long-term strategic planning rather than incidental actions.

Earlier on Thursday, Borisov met with former Hungarian PM, Viktor Orban, whose party Fidesz is a member of the European People’s Party, together with Borisov’s GERB.

Orban has praised Borisov for his ability to be in close touch with the people and his strong personality, the press service of the Bulgarian government said.