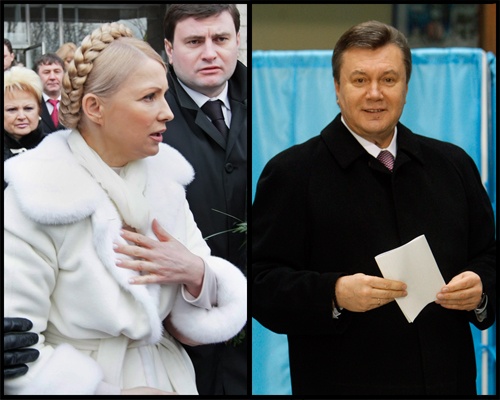 Viktor Yanukovich (r.) emerged as leader of the first round of the Ukrainian elections, according to exit polls. Lacking over 50% of the vote, he will now go to a run-off with Yulia Timoshenko (l.). Phtoto by BGNES

Viktor Yanukovich and acting Prime Minister Yulia Tymoshenko will be facing each other in the runoff of the Ukrainian Presidential Elections after the first round on Sunday.

According to the exit polls, pro-Russian opposition Yanukovich has a small lead in front of Tymoshenko. Businessman Sergei Tigipko is third. Incumbent President Viktor Yushchenko, the leader of the so called Orange Revolution, has received under 10% of the votes.

The exit poll of Ukrainian Democratic Initiative Fund shows that Yanukovich has 32% of the votes vs. 27% for Tymoshenko.

The exit poll of Gfk-Ukraine says that Yanukovich got 35% vs. 26% for the Prime Minister.

Tymoshenko seems to have narrowed the lead that Yanukovich had. The runoff of the Ukrainian Presidential Elections is set for February 7, 2010.