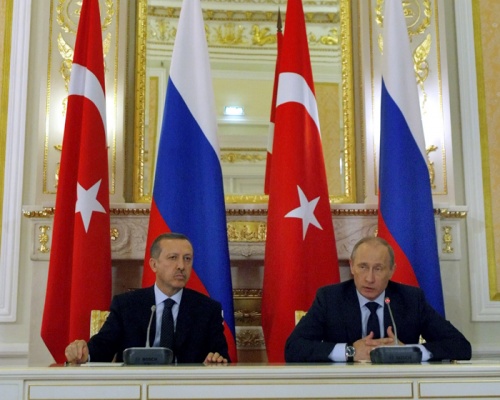 Prime Minister Vladimir Putin has proposed the establishment of a tripartite intergovernmental agreement on developing oil and gas infrastructure, between Russia, Turkey and Italy.

Putin has announced his proposal following talks with Turkey's Prime Minister Recep Erdogan in Moscow on Wednesday. He added that PM Erdogan was in full agreement with the suggestion.

"Now we shall begin discussing this issue with the Italian partners," Putin stated.

The two prime ministers had in August 2009 signed a memorandum of cooperation between Ankara and Moscow in the areas of oil and gas.

The two parties had agreed that Russia would establish a working group to study resources for the Samsun-Jeyhan oil pipeline, and the transport parameters of a project to supply oil through Turkey to European markets.

It was estimated that, upon completion, the capacity of the 555 km pipeline would be 1,5 M barrels a day.

In the protocol for cooperation in the gas arena, Turkey had undertaken to allow Russia to conduct a study on the South Stream project in its territorial waters.

Seismic and environmental surveys are now almost complete. By November 10, 2010, it is expected that Turkey will agree to give permission for the construction of the pipeline.