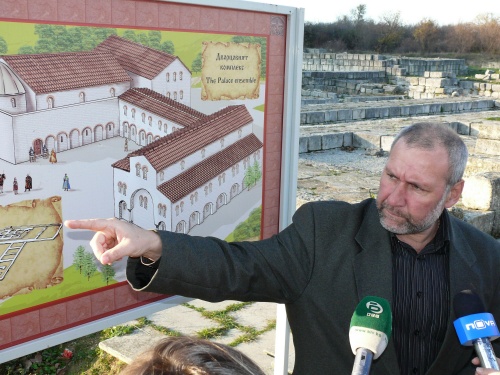 Professor Ovcharov presenting his project for the recreating of the Bulgarian medieval royal palace. Photo by BGNES

Leading Bulgarian archaeologist Nikolay Ovcharov has presented a project for recreating the palace of the greatest Bulgarian medieval Tsar.

The project is aimed at creating an exact 1:10 replica (i.e. ten times smaller) of the palace of Tsar Simeon I The Great (893-927 AD) in his capital Veliki Preslav.

The replica palace will be located on an area of 700 square meters, and its walls will be 3,5 meters high; it will be constructed of light materials. It is going to feature historical performances with the latest light and cinema technology.

In addition to the smaller replica palace of Tsar Simeon, Ovcharov’s projects provides for continuing restoration and preservation works of the remains of the real palace and the Royal Basilica.

“I don’t think we need to make up legends to attract tourists because Tsar Simeon is legendary but is not just a legend,” Professor Ovcharov said adding that the town of Veliki Preslav could attract some 200-300 000 per year, instead of just 21 000 as their number is currently.

Tsar Simeon I The Great (893-927 AD) is known for expanding Bulgaria from Constantinople to Budapest, and for being a great patron of the Old Bulgarian/Slavic literature and Orthodox Christianity.

Parts of his palace and other other magnificent medieval buildings in Veliki Preslav are known to have survived until the 19ths century when the Ottoman Turkish authorities destroyed much of what was left in order to use the stone and gravel from Veliki Preslav for the construction of parts of the first railroad in the Ottoman Empire between Varna and Ruse, which was built in 1863-1866.