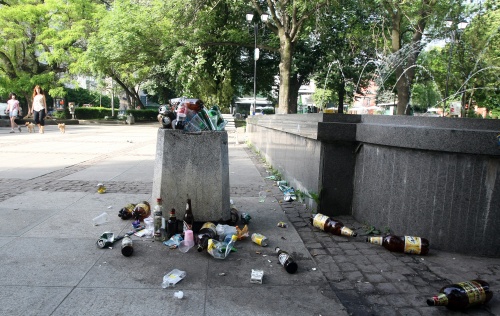 The Sofia Municipality believes the EC had not taken into account its efforts to improve waste disposal in the Bulgarian capital. Photo by BGNES

Bulgaria’s Ministry of Foreign Affairs, Ministry of Environment, and the Sofia Municipality have send a letter to the EC in response to its announcement it was starting a trial against the country over garbage disposal in Sofia.

The Bulgarian institutions have expressed their disagreement with the Commission’s conclusion that the system for processing waste in the capital Sofia does not meet the requirements of EU legislation.

The Sofia Municipality states that the decision of the EC must be based on “the objective facts and circumstances.”

It says that in 2007-2009, in compliance with earlier remarks and recommendations by the EC, it undertook activities to improve the waste processing system in accordance with EU law requirements. In addition, starting January 1, 2009, three installations for preliminary processing of waste have been in operation in Sofia, which reduce the quantity of waste by 60%, and meet the national goals for recycling and reuse.

The Sofia Municipality also points out that a brand new unit of the Suhodol garbage depot was put in operation on September 30, 2009, for storing the waste after the preliminary processing, which has been given high assessment under expert analyses.

Since 2007, Sofia has been working on the creation of an integrated garbage processing system meeting all national and EU requirements, including those under NATURA 2000.

The Municipality declares that it is currently holding public procurement procedures for the construction of a garbage processing plant, composting installations, and a depot for harmless waste. The assessment of the bids will be made in January 2010. At the same time, the Sofia Municipality has submitted application for EU funding for those projects, and is completing its negotiations with the European Investment Bank for co-funding.

The Sofia authorities also stress the fact that much of the garbage deposited around the capital had been moved to depots around the country – in Silistra, Plovdiv, Harmanli, and Lovech – thus improving the situation in Sofia.

The Municipality states that it is doing everything it can in order to resolve all waste issues in Sofia as soon as possible, and is relying on the EC to take them into account in its decision-making.

According to the three Bulgarian institutions, the Bulgarian side does not accept the arguments of the European Commission, and believes that its decision to start a court trial against the country is unfounded since it was made without taking into account information provided by the Bulgarian Ministry of Environment.

The Bulgarian government has moved to rectify the waste problems of Sofia with the adoption of a Decree for financing the construction of regional systems for waste management, and insists that this be considered by the EC, the letter says, adding that the Commission has also been informed of the progress of the integrated waste management system in Sofia.