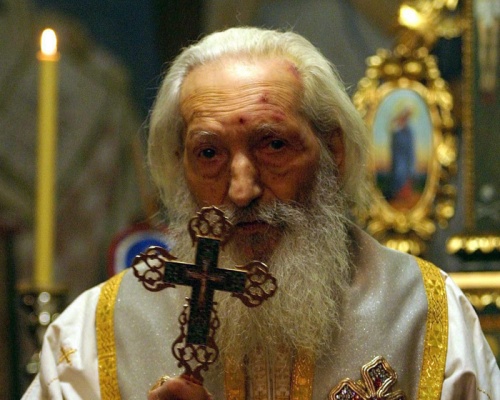 "Patriarch Pavle of Serbia reposed in the Lord", the Serbian Orthodox Church announced on Sunday. Photo by BGNES

The Serbian Orthodox Church has announced that Patriarch Pavle died on Sunday morning, at the age of 95, and that the country will observe 3 days of official mourning.

The Patriarch had been admitted to the military hospital in Belgrade two years ago with a variety of undisclosed health problems.

Pavle became Patriarch of the Serbian Orthodox Church in 1990, just before the collapse of the ex-Yugoslav Federation and the rise of Serb nationalism.

Under his leadership, the Orthodox Church became hugely popular. The majority of the Serbian population of 7,5 million are members of the Orthodox faith.

Before his elevation to the position of 44th Patriarch of the Serbian Church, Pavle served as Bishop of Kosovo, which Serbia considers as its southern province and the cradle of Serbian culture and history.

After 1999, Pavle visited Kosovo several times to express his support for the spiritual pastors and for the Serbian minority that remained there. Under Pavle, The Serbian Orthodox Church moved to obstruct the independence of Kosovo, which was eventually declared by the Albanian majority in 2008.

for the past several years, The Serbian Church was widely suspected of having supported ex-Serb Bosnian leaders, including Radvan Karadjic, helping to hide them from the authorities seeking to bring them to justice.

During his Patriarchate, Pavle succeeded in imposing the voice of the Church throughout Serbia through the introduction of religious classes in schools. The majority of Serbs today consider their Orthodox Church to be the institution in which they have most trust.