Bulgaria Forecast to Raise Same Tax Revenues as in 2008 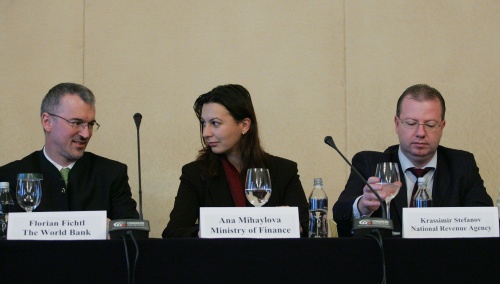 The NRA, Finance Ministry, and World Bank representatives presented the results of a tax reform project. Photo by BGNES

Bulgaria's National Revenue Agency (NRA) is going to raise approximately the same amount of tax revenues in 2009 as it did in 2008.

This forecast was made by the NRA head Krasimir Stefanov during a news conference Thursday on the completion of a World Bank-sponsored project for reforms in Bulgaria’s tax administration.

He pointed out that the increase in the tax revenues in 2009, forecast by the former government in the 2009 State Budget was unrealistic because it was based on a projected economic growth of 4,5% whereas the Bulgarian economy would decline by about 6,5% in 2009.

Stefanov also explained that the NRA information system made a lot of faults which created difficulties for the tax inspectors. In his words, the technical problems are the result of wrongly input data from past years but they are about to be fixed.

The NRA head stated that the Agency was considering options for finding a new building but the possibilities were limited because of the scarce funding.

The conclusion of the World Bank representatives regarding the project at the NRA is that the reforms have produced good results. The WB has recommended that the NRA improve its e-services.