PM Borisov: Politicians Should Be Like Bulgarian Shepherd Dog 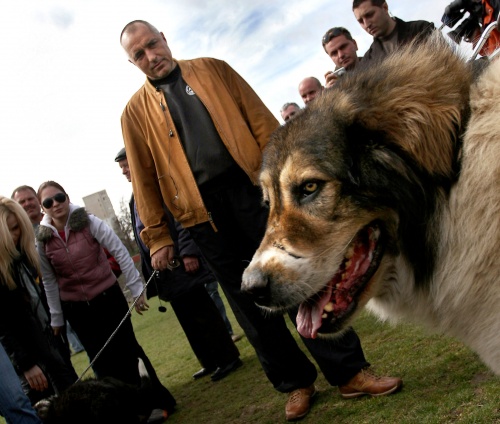 PM Borisov (middle) said politicians should have the qualities of the Bulgarian shepherd dog (right). Photo by BGNES

At the opening of the exhibit, Bulgaria’s Agriculture Minister, Miroslav Naydenov, handed Borisov (in Borisov’s capacity as honorary chair of the Bulgarian Cynology Club) the formal documents for the international recognition of two new Bulgarian dog breeds – Bulgarian Shepherd Dog and Bulgarian Ludogorie Beagle. (Ludogorie is a region in Northeast Bulgaria.)

Naydenov said the recognition of the Bulgarian shepherd dog as a separate breed had been refused for years. He joked that this had been because it was “the dog of the opposition”, and the Ministers of the ethnic Turkish party DPS had prevented its recognition (Naydenov’s predecessor Valeri Stefanov was from the DPS).

“This is now the dog of the ruling party. The Ministers of the DPS have been obstructing this dog on purpose because it was not good for them if Bulgaria had a shepherd dog protecting the people,” PM Borisov joked in turn.

The cynology exhibit in Razlog was focused on the new Bulgarian breeds, but also included competitions in various breed categories.