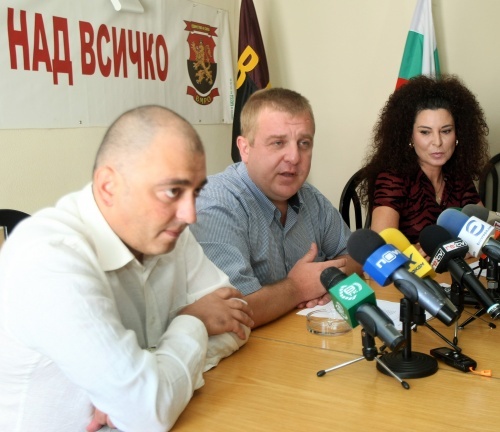 VMRO leader Karakachanov (middle) has raised alarms over the formation of the new "Muslim Democratic Union" party. Photo by BGNES

Karakachanov said Tuesday that to allow “a Turkish party on an ethnic basis in Bulgaria, is a provocation to the citizens of the Republic of Bulgaria,” BNT reported. He added that “the establishment of such an organization can only lead to ethnic tension and mistrust.”

Regarding the MDU, Karakachanov stated that “in this union it says that everyone can participate, who is muslim" - this is contrary to two articles of the Bulgarian constitution.”

The Chair of the MDU party Ali Yuzeirov said that there was nothing unconstitutional in making their voices heard, but as regards the Constitution, he said, many foreign countries have discussed this issue and changed points in their constitutions as a result.

The "Muslim Democratic Union" was founded Saturday in the village of Slavyanovo.

The village is located in northern Bulgaria, near the town of Popovo, an area largely populated by ethnic Turks.

The founders of the "Muslim Democratic Union" are the notorious brothers Ali Yuzeirov and Yuzeir Yuzeirov. The party was found by 680 written declarations while Ali Yuzeirov was elected party Chair.