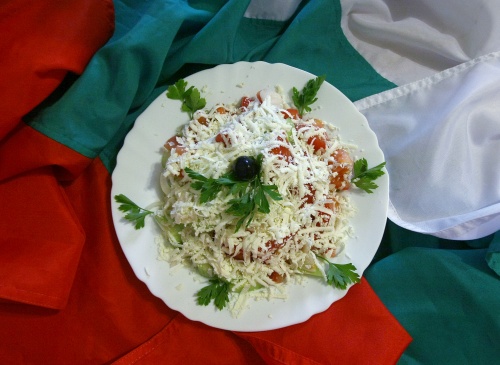 The menu, in English and Cyrillic, is dauntingly long and features more than 20 salads, such as the famed salata shopska. Photo by BGNES

By Leah A. Zeldes |
Daily Herald

Since at least the turn of the last century, when Bulgarian author Aleko Konstantinov inspired a wave of immigration with his account of the 1893 World's Columbian Exposition, "Do Chikago i nazad" ("To Chicago and Back"), Bulgarians have called this area home.

Today, metropolitan Chicago hosts one of the largest Bulgarian settlements outside of Sofia. Most of the present-day community arrived after 1989, when the collapse of Communism eased emigration.

According to Mehanata co-owner Ivan Tzvetkov, a big part of the population lives in and around Des Plaines, and about 80 percent of his clientele is Bulgarian.

Tzvetkov, partner Ruven Kovathev and their families opened their Des Plaines restaurant a year ago, taking over a previous Bulgarian eatery called the Old Well. They've spruced it up inside and outside and installed signs to redeem the unassuming stretch of Lee Street from obscurity.

The menu, in English and Cyrillic, is dauntingly long: nine soups, including the refreshing national favorite, tarator, a chilled summer potage made from yogurt and cucumber flavored with garlic and dill; more than 20 salads, such as the famed salata shopska, named for its Sofia origins; hot and cold appetizers; cheese; several pages of chicken and pork items; beef dishes; fish; a page of kebabs and grilled fare; omelets; and more.

The hearty Bulgarian cuisine mixes elements of Turkish, Greek and Italian food styles with touches of Eastern European, Slavic and even Asian influences, a deliciously riotous jumble of flavors and textures. Our friendly server did her best to explain the dishes, but I still found items we ordered surprising. Vegetarians dining here would have to pick their way carefully through the meaty menu, but it might be done.

We started with the shopska salad, a lovely summer combination of cubed fresh tomatoes, cucumbers, onions, parsley, olives and roasted peppers, tossed with crumbled, feta-like cheese and served with cruets of oil and vinegar. Alongside, we tried a mixed plate of flavorful, thinly sliced cold cuts: lukanka, a nicely spicy, salami-like pork sausage with a flattened oblong shape; fillet Elena, a kind of pork jerky; and zesty dried pastrami. The small platter is plenty for four to share.

Our order from the grill menu, pork fillet, was fairly dry and uninteresting, though. A kebab or mixed grill might be a better choice. Other options include grilled salmon or trout, steak and Bulgarian hot pots served in traditional ceramic casseroles.

Despite the sizable portions, try to save room for dessert: Cake garash, a dense chocolate layer cake, and palacinke, spongy crepes filled with your choice of strawberry jam, honey or Nutella, are both worth it.

Views on BG » Be a reporter: Write and send your article
Tags: cuisine
Advertisement
Advertisement
Expats.bg All Are Welcome! Join Now!
Related Articles:
More from Views on BG