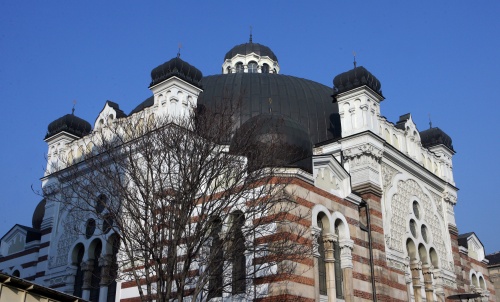 The Synagogue in downtown Sofia will mark 100 years since its consecration on September 9. Photo by Sofia Photo Agency

The 10th edition of the European Day of Jewish Culture is held Sunday, across 20 countries in Europe.

The events aim to have the public at large discover the cultural and historical heritage of Judaism. The 2009 celebrations are focused on "Jewish Festivals and Traditions."

The organization of Bulgarian Jews "Shalom" is marking the day by holding an "open doors" event at the "Jerusalem" hall of the Jewish Culture Community Center in downtown Sofia. The day comes just three days ahead of the 100th anniversary of the consecration of the Synagogue in Sofia. The ceremony for this event will be held on September 9, in the presence of Bulgaria's President, Georgi Parvanov.

The European Day of Jewish Culture represents the biggest and most extensive Jewish culture festival in Europe. It was launched in 1996 by the B'nai B'rith in Strasbourg, in response to numerous requests from tourists wishing to see the Jewish heritage sites in region.

In 2000, a partnership was formed between B'nai B'rith Europe, the European Council of Jewish Communities (ECJC) and the Red de Juderias, a Jewish tourism route linking 15 Spanish cities.

The number of participating countries has now grown substantially since 2001 and attendances have totaled around 200,000 people with an average of 900 events in 300 cities.