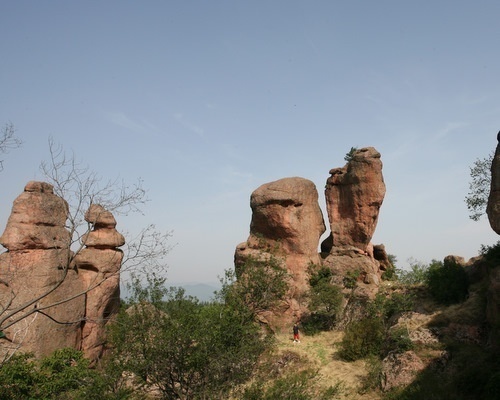 A Belgian-sponsored project provides for the setting of a mining museum near the Belogradchik Rocks in Northwest Bulgaria. Photo by BGNES

Belgium's Ambassadors to Bulgaria and Serbia presented Monday in the northwest town of Belogradchik the investment plans of a Belgian-owned company.

Belgium's Ambassador to Bulgaria, Marc Michielsen, and the Belgian Ambassador to Serbia, Denise de Hauwere, held a joint press conference to present the plans of Mining Company Belogradchik Jsc, which owns a concession for a operational mine in Eastern Serbia, and a closed mine near the Bulgarian town of Belogradchik.

The diplomats, accompanied by the owners of the company, and representatives of the local authorities the project of turning the mine "Zeleni Grad" which was shut down in the first half of the 20th century into a mining museum.

The idea has been put forth by the town Mayor Emil Tsankov, according to the BGNES news agency. The closed mine is near the miraculous Belogradchik Rocks - a world-famous natural tourist attraction.

Later on Monday, Ambassador Michielsen visited the northwest Bulgarian city of Vidin including the site of the construction of the future Danube Bridge II.