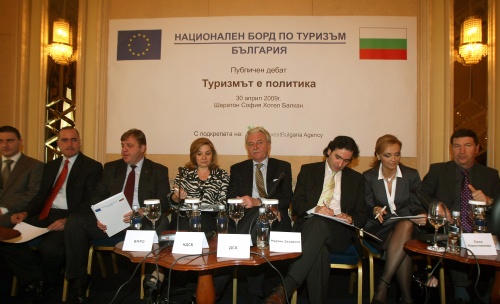 Representatives of the major political parties also took part in the National Tourism Board debate on Thursday. Photo by BGNES

Bulgaria's National Tourism Board wants about EUR 30-45 M for advertising the Bulgarian tourism per year.

During a debate meeting Thursday, the Board, which is an association of tourism businessmen, estimated that the Bulgarian state had to allocate a sum equal to about 1-1,5% of the total revenue of the Board's members, which is about EUR 3 B.

The businessmen also demanded a value-added tax of 7% (Bulgaria's VAT is 20%) on all components of the tourism industry, stressing that in most states VAT on tourism services was between 3% and 10%.