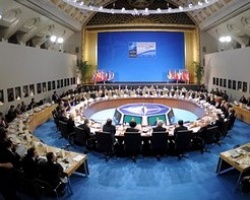 The historic NATO summit marks the 60th anniversary of the establishment of the Alliance and return of France in the NATO structures since leaving them in 1966. Photo by BGNES

There is a strong possibility that NATO would be unable to reach Saturday consensus about naming the new Secretary General of the Alliance.

The statement was made at the NATO summit in Strasbourg, France, by the German Defense Minister, Franz Josef Jung, who is quoted by the Bulgarian news agency BGNES.

The decision could be postponed over Turkey's official opposition to the nomination of Danish Prime Minister, Anders Fogh Rasmussen, considered top contender for the NATO post.

The historic NATO summit marks the 60th anniversary of the establishment of the Alliance and return of France in the NATO structures since leaving them in 1966. Albania and Croatia will join the Alliance during the summit.

Jung confirmed that Turkey had reservations regarding the Danish nomination due to Rasmussen's reaction to the Mohammad caricatures that fired up the Arab world in 2006.

At the time, the Danish PM refused to officially apologize for the caricatures, triggering attacks on Danish embassies in several Muslim countries while some Western media launched campaigns for the protection of free speech.

The German Defense Minister told reporters that Rasmussen remained the favorite for the job and had the support of Washington, Berlin, London and Paris.

In the mean time, in a phone call, Solomon Passy, who is the Bulgarian nominee for the new NATO Secretary General, told Darik radio that Bulgaria still had strong chances for the Secretary General selection.

Passy stated he did not want to comment on the position of different countries, but said that Bulgaria enjoyed strong support from countries from the Mediterranean region.

Passy confirmed that the new Secretary General might not become known at the summit in France, adding the Alliance had till August 1 to make that decision. The mandate of the current Secretary, Jaap de Hoop Scheffer, ends on July 31.