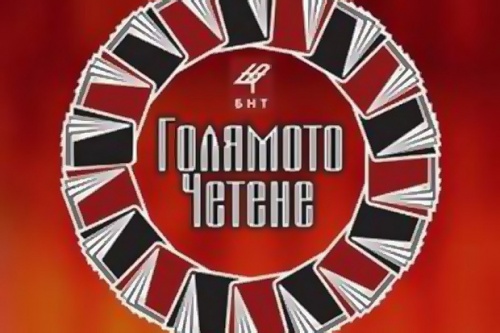 вЂњUnder the YokeвЂќ was selected as the top novel in Bulgaria by participants in the вЂњBig ReadвЂќ campaign, organized by the Bulgarian National television (BNT), under the BBC trademark. Photo by 4etРµne.bnt.bg

The book was selected by a vote from the 11 other finalists of the "The Big Read" campaign, organized by the Bulgarian National television (BNT), under the BBC trademark.

Novels by Bulgarian authors grabbed the second and the third ranking as well - "Time of Violence" of Anton Donchev and "Tobacco" of Dimitar Dimov.

"100 Years of Solitude" by Gabriel Garcia Marques is 12th, Douglas Adams' " Hitchhiker's Guide to the Galaxy" is 11th, "The Count of Monte Cristo" by Alexandre Dumas is 10th, 9th is "East of Eden" of John Steinbeck while another of Dimitar Dimov's novels - "Doomed Souls" ranked 8th.

Tolkien's "The Lord of the Rings", the book that already won the British, German and Australian edition of the "Big Read" was ranked only 7th by the Bulgarian readers. "The Master and Margarita" by Mikhail Bulgakov is 6th, "The Little Prince" by Antoine de Saint-Exupery is 5th while "The Iron Candlestick", another Bulgarian title, written by Dimitar Talev is 4th.

By selecting all Bulgarian titles as the top four novels, Bulgarians boosted even more patriotic feelings than the Hungarians - the only readers from a country where the campaign has been held, to rank novels by local writers first and second.

Bulgarian movie director, Andrei Slabakov, who was the celebrity vouching for "Under the Yoke" during the Sunday finals said that it was to be expected and only natural that a Bulgarian book would win the top ranking.

"The Big Read" campaign was launched in October of 2008. The top 100 titles were reveled on December 21. The final 12 were selected by Bulgarian readers, who voted on the 4etРµne.bnt.bg site, through short text messages or on the phone.