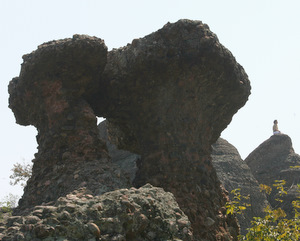 The miraculous rock formations near the northwest Bulgarian town of Belogradchik are second again in the global campaign to select the world's new Seven Wonders. Photo by Sofia Photo Agency

The miraculous rock formations near the northwest Bulgarian town of Belogradchik are second again in the global campaign to select the world's new Seven Wonders.

On February 16, they moved up to first in the provisional ranking in the Group D category, "Caves, Rock Formations, and Valleys".

Bulgaria's Belogradchik Rocks are still before the US Grand Canyon, which remains third, and are only behind Serbia's Davolja Varos ("Devil's Cave").