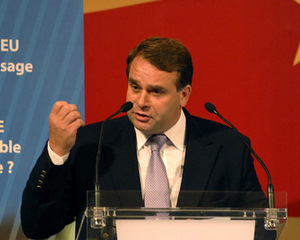 The Chair of EP's Committee on Agriculture and Rural Development, Neil Parish. Photo by agri-zaragoza-conference.eu
Neil Parish was born in 1956. He has been a Member of the European Parliament for the UK Conservative and Unionist Party since June1999.

MEP Parish represents England's South West, and after the Rock of Gibraltar was attached to the region in 2004, he calls himself 'the MEP for Gibraltar'.