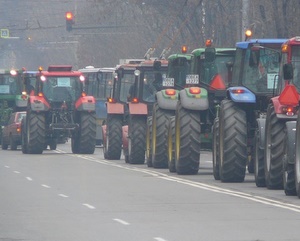 The grain producers headed to the building of the Parliament to gather for a protest demonstration.

"A total of 600 agriculture machines and 800 protesters will join the rally," announced Radoslav Hristov, the chair of the National Grain Producers' Association.

Sofia Interior Directorate is to provide security services and traffic regulation to guarantee the safety of the protesters and the citizens.

The farmers stage yet another rally against the government policy in the sector after they blocked major roads on the past few days with their agriculture machines.

The agriculture workers demand immediate payment of delayed national subsidies as well as the government to envisage BGN 378 M in subsidies needed by grain producers from budget 2009.

Bulgaria's grain producers already gathered on the central streets of Sofia in support of these demands in September, and by blocking roads across the country in November.