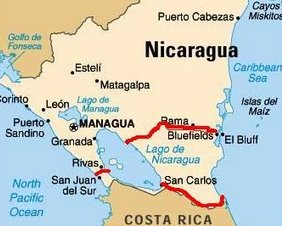 Several routes have been proposed for a canal in Nicaragua that would compete with the Panama Canal. File photo
As relations between Moscow and Nicaragua are getting warmer, Russian media report that President Dmitry Medvedev is interested in the long-planed project for a Nicaraguan canal linking the Atlantic and Pacific Oceans.

The canal, plans for which exist since the early colonial era due to the favourable geography of the area, would compete with the Panama Canal and is supposed to carry bigger ships than the existing route.

Several possible routes have been proposed for a canal in Nicaragua, all making use of Lake Nicaragua, the second largest lake in Latin America.

If built, the Inter-Oceanic Nicaragua Canal would cut time and several hundred miles off the route from China to Europe or North America.

The idea for Russian participation in the project was reportedly discussed on Thursday as Nicaraguan President Daniel Ortega began an official visit to Moscow, his first for 23 years, to discuss trade and economic issues as well as regional projects in Latin America with President Dmitry Medvedev.

Nicaragua was the second country, after Russia, to recognise last August the independence of South Ossetia and Abkhazia, the two pro-Russian breakaway provinces of the former Soviet republic of Georgia.

In September, Ortega received Russian Deputy Prime Minister Igor Sechin in Managua to discuss a Nicaragua-Russia economic cooperation programme, which was an end to the long-term virtual freeze in relations between the countries.