US Ambassador to Sofia Salutes Bulgaria on Completion of Iraq Mission 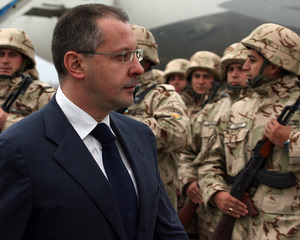 Bulgaria's PM Sergey Stanishev greeted the last Bulgarian unit to serve in Iraq on Wednesday; the US Ambassador McEldowney has thanked Bulgaria for its contribution to the stabilization of Iraq. Photo by Yuliana Nikolova (Sofia Photo Agency)
The US Ambassador to Sofia Nancy McEldowney has saluted the Bulgarian soldiers who served in Iraq with the completion of their almost six-year-long mission there.

In a statement sent to the media Tuesday, a day before the last Bulgarian unit returned from Iraq, Her Excellency called the Bulgarian men and women in uniform "heroes" and "patriots" who successfully contributed to bringing peace and stability to Iraq.

"Bulgaria has proven itself an unwavering friend and invaluable ally. The decision to join the Coalition's efforts was not an easy one and it did not come without cost. ... The United States salutes the brave men and women who serve in the Bulgarian Armed Forces and is honored to stand as a genuine friend and true partner of this fine country", McEldowney's statement reads.

The US Ambassador declared the completion of Bulgaria's military mission in Iraq a very proud moment for the Bulgarian people and for the friends of Bulgaria.