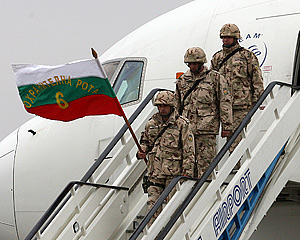 Photo by Yuliana Nikolova (Sofia Photo Agency)
The withdrawal of Bulgaria's troops from Iraq was completed as the last Bulgarian units landed at the Sofia International Airport Wednesday afternoon.

Bulgaria has been part of the US-led Coalition forces for the stabilization and recovery of Iraq since May 2003, stepping in immediately after the invasion of Iraq was declared over on May 1, 2003.

Between 2003 and 2005, the 500-strong Bulgarian unit in Iraq guarded the holy Shia city of Kerbala. It was in this period that Bulgaria's forces in Iraq lost 13 soldiers in combat or incidents.

Five Bulgarian battalions took part in this first phase of Bulgaria's involvement in Iraq on a rotation schedule of six-month deployments.

After withdrawing its larger force at the end of 2005, in March 2006, Bulgaria sent a 155-strong unit to guard the headquarters of the People's Mujahedin of Iran at Camp Ashraf, 100 km west of the Iranian border.

In mid-2008 the Bulgarian unit was relocated to guard the US detention facility at Camp Cropper near the Baghdad International Airport.

Between 2003 and 2008, the Bulgarian soldiers took part in a total of 97 civilian reconstruction projects in Iraq.