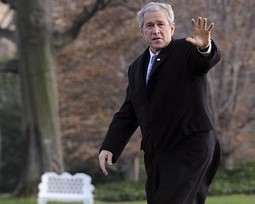 Bush is expected to meet with Iraqi leaders and American troops and has been welcomed by Ambassador Ryan C. Crocker and Gen. Ray Odierno.

Bush's trip to Baghdad is intended to celebrate the conclusion of security pact with Iraq, called the Strategic Framework Agreement and the Status of Forces Agreement, CNN reported.

The pact changes some of the terms of a United Nations mandate that allows the US-led coalition to hold military operations and detain people without charge if they are suspected to be security threats.

The document also calls for all US troops to be withdrawn by the end of 2011.

It is Bush's fourth visit to Iraq as president - his most recent trip there was in September last year.