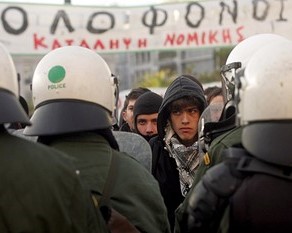 Earlier in the evening there was a peaceful commemoration for the 15-year-old Alexis Grigoropoulos, who was shot dead by the police last week.

The shooting of the boy was the catalyst for the violence, but it comes along with plummeting popularity of the centre-right government against a backdrop of high youth unemployment, rising cost of living, and a widening gap between rich and poor.