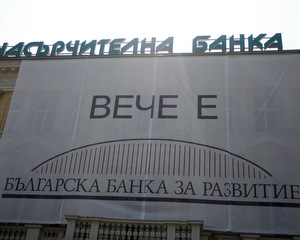 The government takes such a step for the second time in less than two month after it increased the capital of the Bulgarian Development Bank by BGN 100 M on November 4, 2008.

The Bulgarian Development Bank (BDB) is a top priority financial instrument of the government as it is creating various schemes to support entrepreneurship especially with respect to the export potential and competitiveness of the Bulgarian economy.

Wednesday's financial injection of the BDB will enable it to grant credits to commercial banks, which in turn would be able to provide loans to small and medium-sized enterprises with more favorable conditions.

The BDB finances its activity by emitting bonds, through EU funds, and though credits from local, and international financial institutions. It was set up in April 2008 as a successor to the former "Encouraging Bank" in order to help for Bulgaria's economic development.

The increases of the capital of the BDB are not limited by its statutes. The decision to increase its capital are made by the general assembly of its shareholders but the Bulgarian state always holds no fewer than 51% of its shares, which are non-transferable.