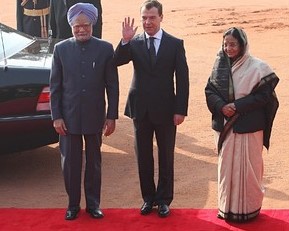 The state-run arms exporter, Rosoboronexport, told RIA Novosti on Friday it would sign a contract on the delivery of 80 Mi-17 Hip military transport helicopters to the Indian air force.

Russian nuclear power chief Sergei Kiriyenko said Russia and India would sign an agreement to build another four reactors at the Kudankulam nuclear power plant and a protocol on the delivery of nuclear fuel worth USD 700 million to Indian nuclear power stations.

At the same time Russia's space agency said Moscow and New Delhi would sign a new document on cooperation in space exploration, which includes plans to send two Indian astronauts to space on board a Russian Soyuz spacecraft in 2013.