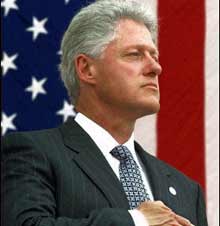 Hillary Clinton, who has been in the New York Senate for 8 years, would remain at her post until she officially assumes the Secretary of State duties. Then, the task of choosing a successor falls to the New York's Democratic Governor David Paterson. Paterson's choice would serve for two years, before a special election in November 2010 to decide who fills the last two years of Clinton's term.

If that happened, Clinton would become the third former president to go from the White House to Capitol Hill.

President John Quincy Adams lost his re-election bid in 1828. Two years later he returned to Washington after winning election as a congressman from his home state of Massachusetts. He served in the House of Representatives until his death in 1848.

President Andrew Johnson also served as a Senator from Tennessee in 1875, 7 years after the Senate acquitted him of impeachment charges. He died a few months after taking office.

Bill Clinton would bring his experience to the job, and his inside knowledge of Washington politics.

But some Democratic strategists who used to work for Bill Clinton don't think the former President would want to go from leader of the free world to being the junior senator from New York.

Clinton's office deferred to Paterson's office when asked for a comment.