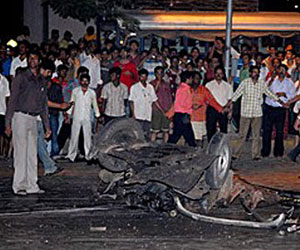 The attackers have also taken over two luxury hotels - the Taj Mahal and the Oberoi - where they are holding dozens of hostages on multiple floors.

The two five star hotels have also been hit by large explosions, and their lobbies are in flames.

The gunmen, who were armed with machine guns and grenades, attacked in coordination the two hotels, a cafГ©, a train station, among others - a total of nine sites.

They were trying to find persons with US or UK passports, according to witnesses.

According to the BTA, 15 hostages are being held in the Oberoi Hotel, including seven US and Israeli citizens.

Among the dead is the head of the Maharashtra state's anti-terror squad, who was most likely killed in the aftermath of the attacks.

The army forces have entered both hotels. Two terrorists have been shot, and nine have been detained; five policemen have also been killed, the CNN reported.

The unknown group "The Deccan Mujahideen" has claimed responsibility for the Mumbai attacks in an email it sent to news agencies, Indian TV channels reported early Thursday.

The UK Foreign Office warned all British citizens in Mumbai not to leave their homes, and declared they were facing the threats of terrorist attacks all over India.

The US State Department announced that the attacks mostly likely were aimed at foreign tourists. According to its spokesman Robert Wood, there was no information of dead or injured US citizens.

Both the US and the UK condemned the attacks and vowed to continue to cooperate with the Indian authorities on anti-terrorist measures.