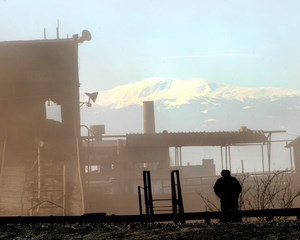 Bulgaria's troubled steel-mill Kremikovtzi will be surveyed by scouts of the Brazilian company CSN which has expressed interest in investing in the plant. Photo by Nadya Kotseva (Sofia Photo Agency)
Representatives of the Brazilian company CSN (Companhia Siderurgica Nacional) are arriving to Bulgaria's capital Sofia Monday to inspect the troubled steel-maker Kremikovtzi in view of its declared interest to bid for the purchase of the plant.

The news about CSN's investment interest in Kremikovtzi was announced on November 19 when the management of the company had a working meeting with the Bulgarian Minister of Economy Petar Dimitrov during his official visit to the Brazilian city Sao Paolo last week.

Representatives of the Kremikovtzi management and syndicates also took part in the meeting from Sofia via video satellite.

According to the Technology Director of the Bulgarian steel plant Stoyan Pirlov, the Brazilian company, which is a large producer of iron ore and had really strong positions on the domestic market, was interested in acquiring a plant in Europe.

The visit CSN's scouts to Kremikovtzi is expected to shed more light on the plans of the Brazilian company with respect to the plant.

According to sources from the plant management, the Ukrainian company Smart Group was still interested in bidding for the purchase of Kremikovtzi.

CSN was founded in 1969, and is presently the second largest steel-maker in Brazil. Its main plant is located in the city of Volta Redonda in the state of Rio de Janeiro.