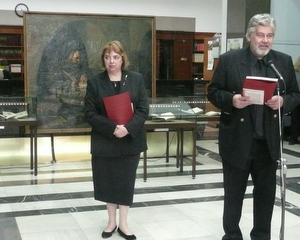 The exhibition in the National Library St. Cyril and St. Methodius is part of a series of events celebrating the work of Father Paisiy, spanning over a period of five years - until 2012 when the actual 250th anniversary of the book is.

Father Paisiy's Istoriya Slavyanovbulgarskaya is not the first attempt to write a history of the Bulgarian nation but it is considered the most significant as its distribution around the Bulgarian-populated lands at the end of the 18th century led to the Bulgarian National Revival, which culminated into the National Liberation of Bulgaria from the Ottoman Empire in 1878.

Istoriya Slavyanobulgarskaya was crucial for raising the awareness of the Bulgarian people as one national entity, and for prompting them to assert their self-determination, and to seek national independence.

The exhibition presents 24 original copies of Father Paisiy's history, which was distributed around Bulgaria through hand-written copies, and was read to the groups of Bulgarians all across the country by the heroes of the Bulgarian National Revival - monks, priests, teachers.