Uzbekistan Not Interested in Supplying Natural Gas for Nabucco 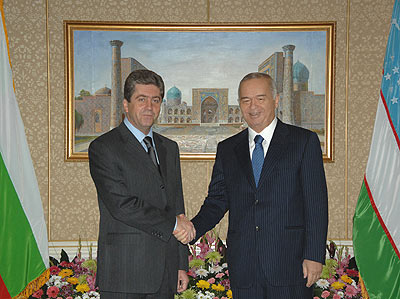 Karimov made this statement in response to a question by his Bulgarian counterpart Georgi Parvanov, who is on an official visit to the Central Asian country.

"Uzbekistan exports gas only to Russia, and then it exports wherever it wants", Karimov declared pointing out his country had only one gas pipeline from the time of the Soviet Union, which channeled its natural gas supplies to the Russian Federationl.

Karimov made it clear that Uzbekistan did not intend to look for alternative gas buyers in Europe, and Europe's energy security and the Central Asian gas exports for it were not part of Uzbek plans.

The Uzbek President did say, however, that Russia should not exert pressure on natural gas prices.

One of the main purposes of the three-day visit of Bulgaria's President Georgi Parvanov in Uzbekistan is believed to be the acceleration of the Nabucco project.

During the meeting Karimov explained that his country exported about 17 B cubic meters of natural gas, and that the exports were expected to reach 15 B cubic meters in the coming years.

He also said he was going to consider the invitation of the Bulgarian President to take part in the energy summit to take place in Sofia in April 2009 where Nabucco will be one of the central themes.

Uzbekistan is expected to become a major transit country thanks to the large gas supply pipeline under construction that will allow Turkmenistan to export gas to China.