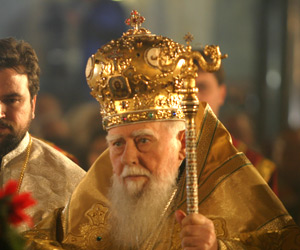 His Holiness Maksim the Partiarch of Bulgaria and the Bishop of Sofia was born on October 29, 1914, as Marin Naydenov Minkov in the village of Oreshak, close to the town of Troyan.

He graduated from the Sofia Seminary of St John of Rila and from the Orthodox Theology Department of the Sofia University.

Partiarch Maksim took Holy Orders in 1941, and became secretary general of the Holy Synod in 1955 and titular bishop of Branit in 1956.

Maksim led the Bulgarian Orthodox Church during much of the period of communist dictatorship, and during the country's post-communist transition when for several years the Church split into two warring Synods.

The Patriarch of the Bulgarian Orthodox Church automatically receives the title of Bishop of Sofia.