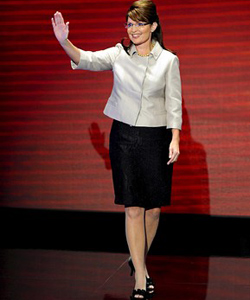 According to the article, Republicans have expressed fear that the weeks-long building of Palin's image as an average "hockey mom" would be hurt by recent revelations that the Republican Party outfitted her with expensive clothing from high-end stores.

The Republican ccampaign finance reports confirm that the Republican National Committee spent USD 75,062 and USD 49,425 at two of the most expensive New York stores in September for Palin and her family.

Palin's advisors also said that the purchases, which total about USD 150,000 and were listed in the finance report as "campaign accessories" were made in a hurry after the governor of Alaska was chosen as the Republican vice-presidential candidate because she needed new clothes to match climates across the 50 states.

Many Republicans, however believe that such an image is unhelpful when lots of families are experiencing economic pain, and when the image applies to a candidate, like Palin, who has run for office in part on her appeal as an outdoors enthusiast and former small-town mayor scorning pretensions.

"No longer a net asset to the Republican ticket, Sarah Palin may in fact be weighing John McCain down. Those voters crucial to the final outcome - the undecided and independents - don't quite like her, think her selection was cynical and political and cannot imagine her ever being president," writes the British "Independent in a commentary about the Governor's revamped wardrobe.