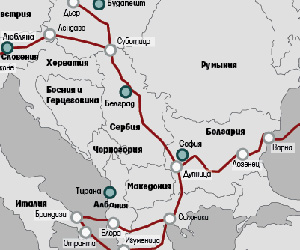 After passing through Bulgaria's territory, the project route of the South Stream pipeline proceeds to Greece, Italy, the Western Balkans, and Central Europe. Map by vedomosti.ru
The Russian energy giant "Gazprom" is going to take its time with the South Stream gas transit pipeline by putting off the launching of the projects by at least two years, the Russian business newspaper Vedomosti reported Friday.

In January the Gazprom Director Aleksei Miller stated the first gas would be delivered through the pipe in 2013. Bulgaria is an important participant in the South Stream project.

Vedomosti, however, cites the company's "General Plan for the Development of the Gas Sector by 2030", of which it claims to have a copy, as saying the gas deliveries through South Stream would start in 2015-2024.

The documents also mentions the exact projected capacity of the pipeline, which had not been revealed previously - 31 billion cubic meters per year.

The exact time of the launching of the South Stream would depend on a number of factors, according to the Gazprom's General Plan, including the conditions on the domestic and foreign markets, the state policy in the sectors, and the success of the negotiations on its route with other countries.

Vedomosti points out the document did not contain any estimate of the cost of the construction of the pipeline but it reminds that earlier the South Stream section going through the Black Sea was estimated to cost USD 10 B, plus at least as much for its land part.

The General Plan also mentions that Russia needed to construct 2 400 km of pipeline on its own territory in order to be able to launch South Stream.

The article cites a Russian analyst as saying this delay by at least two years could allow the EU-sponsored Nabucco gas pipeline, which is considered a competitive project, to grab hold of the Central European market. Respectively, this could then force Russia and Gazprom to reconsider the South Stream project.

The Nabucco pipeline is expected to be launched in 2013, and to transport between 26 and 32 billion cubic meters of natural gas per year.

The routes of the two colossal pipelines will cross on Bulgarian territory. Bulgaria's government signed the agreement for the South Stream pipeline during former Russian President Putin's visit to Sofia in January 2008, and it was ratified by the Parliament several months later.