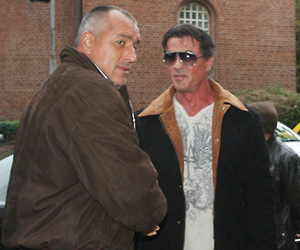 Borisov is the only politician Mr Stallone is to meet during his short trip to Bulgaria that includes visits to the Nu Boyana film studios and the Worldwide FX company that made the special effects for Rambo 4.

Speculations that Rambo 5 would be shot in Bulgaria have been circulating for months. Representatives of Nu Image said it is too early to predict where the film will be shot.