Bulgaria Prince Kardam to Be Taken Out of Artificial Coma 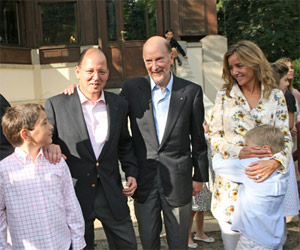 The Bulgarian Prince Kardam (second left), the eldest son of Simeon Saxe-Coburg (middle) and his wife (right) were seriously injured in a car accident on August 15. Photo by Yuliana Nikolova (Sofia Photo Agency)
The Bulgarian Prince Kardam, the eldest son of the former Bulgarian Tsar and Prime Minister Simeon Saxe-Coburg, who remains in a Madrid hospital after a serious car accident, is going to be taken out of the artificial coma in the next few days.

The news was announced by his brother Konstantin before the Spanish press Thursday.

Konstantin has further said that the family was finally beginning to have some hope that his brother's state was going to improve.

The Prince explained that Kardam's two fingers have not been amputated, but he rather lost them during the accident.

Kardam's wife, Miriam Ungri, who has also been in the car during the accident and was released from a different hospital on September 4, has not yet visited him per the doctors' advice.

The 46-year-old Bulgarian Prince Kardam was listed in critical condition after sustaining serious head trauma resulting from a car accident near Madrid on August 15, 2008.