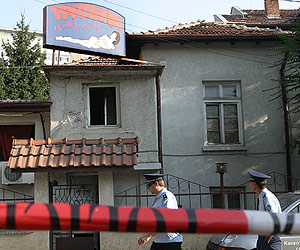 The Sofia Police have sealed off the area around the Pantera bar, which is allegedly a brothel, where the first of the two bomb blasts occurred Sunday night. Photo by Nadya Kotseva (Sofia Photo Agency)
Five persons were injured in two bomb attacks against two striptease bars in the downtown of Bulgaria's capital Sofia late Sunday night.

The first bomb explosion occurred at about 11:20 p.m. at the "Pantera" striptease bar located on the corner of the Zdrave Street and the Milosurdie Street, which runs parallel to the Bulgaria Blvd.

The bomb was allegedly placed before the front door of the bar. One person was severely injured in this explosion - the 36-year-old Borislav Nikolov, whose feet are severed. According to some accounts, Nikolov is the manager of the bar, whereas according to others he is one of the guards.

The second bomb explosion occurred some ten minutes later, at about 11:30 p.m. at the "Casablanca" striptease bar, which is located on the Urvich Street in the Hipodruma Quarter.

As a result of the blast, two men were seriously injured - the 30-year-old Mustafa Yumer Emirov, and the 53-year-old Emil Krasimirov. The three injured men are in the hospital of the Military Medical Academy.

Two women, one of them pregnant, were lightly injured by broken glass but did not have to be hospitalized.

The Chief Commissar of the Interior Ministry Pavlin Dimitrov, and the Director of the Sofia Police Nikolay Yanev arrived to the sites of the explosions shortly after the first police cars and ambulances were already there.

The police are currently investigating two main motives for the explosions - revenge and attempts to eliminate competition.

The two night bars allegedly serve as brothels but their exact activities and status are also matters of investigation.