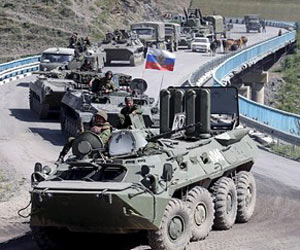 Russian military units continue controlling the Georgian port town of Poty. Photo by BGNES
Georgia's Parliament gave their support to the proposal of Georgian President Mikheil Saakashvili to continue the martial law in the country until September 8, 2008.

The proposal has been approved at an emergency meeting of the Parliament, as reported by ITAR-TASS.

The first ruling declaring martial low in Georgia in connection to the conflict in South Ossetia, was signed by Saakashvili on August 9 and provided for a 15-day effective period.

In the mean time, the Deputy Chief of Staff of the Russian Army, General-Colonel Anatoly Nogovitsin announced that Russian military units were going to continue controlling the Georgian port town of Poty on the Black Sea coast and make patrol rounds in the area..

According to Nogovitsin, the patrolling was included in the international agreement regarding the conflict.

"Poty in not included in the security zone, but this does not mean that we are going to sit behind the fence and watch them playing around on their humves," Nogovitsin is cited saying by several Russian information agencies.