US Ambassador to Moscow: Russia Was Justified in Responding to Georgia Attacks 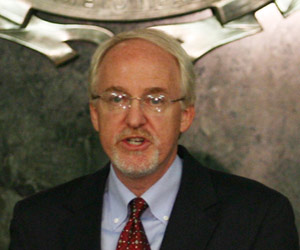 The new US Ambassador to Moscow John Beyrle said Russia's response the initiatial Georgian attacks on South Ossetia were justified. Photo by Yuliana Nikolova (Sofia Photo Agency)
The former US Ambassador to Bulgaria John Beyrle, who is already in charge of the American Embassy in Moscow, said Russia was justified in responding to the Georgian attacks on the Russian peacekeepers in South Ossetia.

In an interview for the Russian newspaper Komersant, Beyrle points out the United States repeatedly tried to persuade the Georgian leadership not to make any offensive steps.

In his words both Russia and America had been trying to resolve the frozen conflicts on Georgia's territory for a long time.

The Russian response to the shelling of the South Ossetian capital Tskhinvali by the Georgian forces was justified, according to Beyrle.

Yet, he makes it clear that after the initial stage of the conflict the Russian troops had penetrated deep into Georgia, and had threatened the territorial integrity of the country.